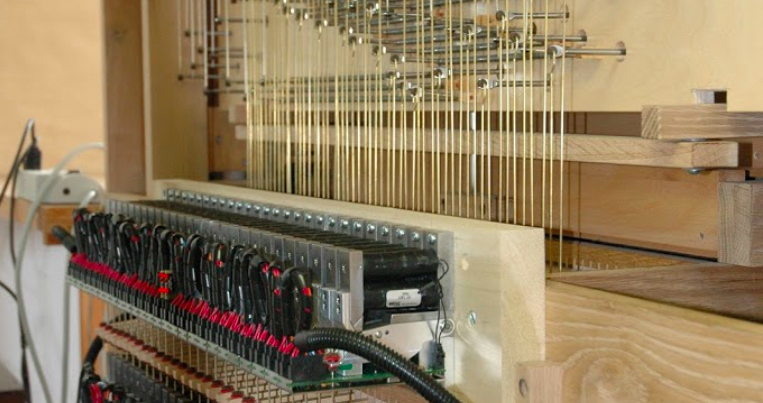 In Dom Bedos's treatise L'art du facteur d'orgues, the manufacturing techniques of the windchests and the mechanics of the keyboards are at the heart of the organbuilder's craft, and form the basis for the sound of the organ pipes. Restoration techniques of historic organs have evolved considerably, and when listening to these mechanical instruments, it is clear that they are a class of their own, so rich in culture and history.

But what about the Orgelbewegung, the movement to "return to basics" and emulate old organs when building new instruments that started rapidly gaining popularity in North America during the 1960s and later? Do these "insiders" really appreciate the construction of the many new so-called "old-fashioned" organs, and have they really borne fruit with young people and the general public?

In recent years, the sound of mechanical-action organs has transformed how we think about the repertoire of the great masters. The characteristic sound of the pipes, which results from the type of windchest and mechanical action, is particularly effective in producing musical phrasing — these nuances depend on the clarity of the attack and the release of the key by the organist on the keyboard. The nineteenth-century French organ builder Aristide Cavaillé-Coll (and others) adopted an innovation for the time, the Barker mechanical assistance machine. Thanks to this new adaptation to the traditional mechanical key action, his instruments were able to maintain a certain lightness of touch while preserving the traditional sound of mechanical action. This led to the creation of very large instruments in France such as the organs of the Basilica of St. Denis (1841), La Madeleine (1846), Saint-Vincent-de-Paul (1852), Sainte-Clothilde (1859), and many others.

At the beginning of the twentieth century, aesthetics began to shift, favoring the post-Romantic and symphonic (in the anglophone sense) musical trends, and there was an increased demand for very large instruments. With the advent of electricity, it became possible to manufacture massive instruments with many keyboards without increasing the weight of the key action. But as time went on, organists did not necessarily appreciate the compromise in sound resulting from electric action or pneumatic wind chests. Indeed, the sounds of these organs fundamentally differ from the traditional mechanical organ. When a key is depressed, it is either on or off — the organist can no longer control the pipe speech.

The Philosophy and the Sustainability of the Pipe Organ

It is our belief that the electrical key action of a modern organ should be in line with the sound of traditional mechanical actions, and that the artistic qualities of the organist's touch obtain the best sound from the pipe organ. To facilitate this, we have created a new kind of assistance machine, which consists of electromagnets attached to trackers (or directly to the pallet valve or cone valve); the digitally-controlled system follows the organist's touch and opens and closes the magnets in real time. This proportional assistance system is completely transparent and can, if necessary, be superimposed on an existing mechanical action system. It also maintains the adjustment of the keyboards over time while avoiding the truncation of the instrument's fidelity and sound. The following diagram is a basic illustration of the difference between the traditional "on/off" electric action, and the two possibilities that our proportional NovelOrg key action can provide ("on/off" control or "proportional" control, following the organist's touch): 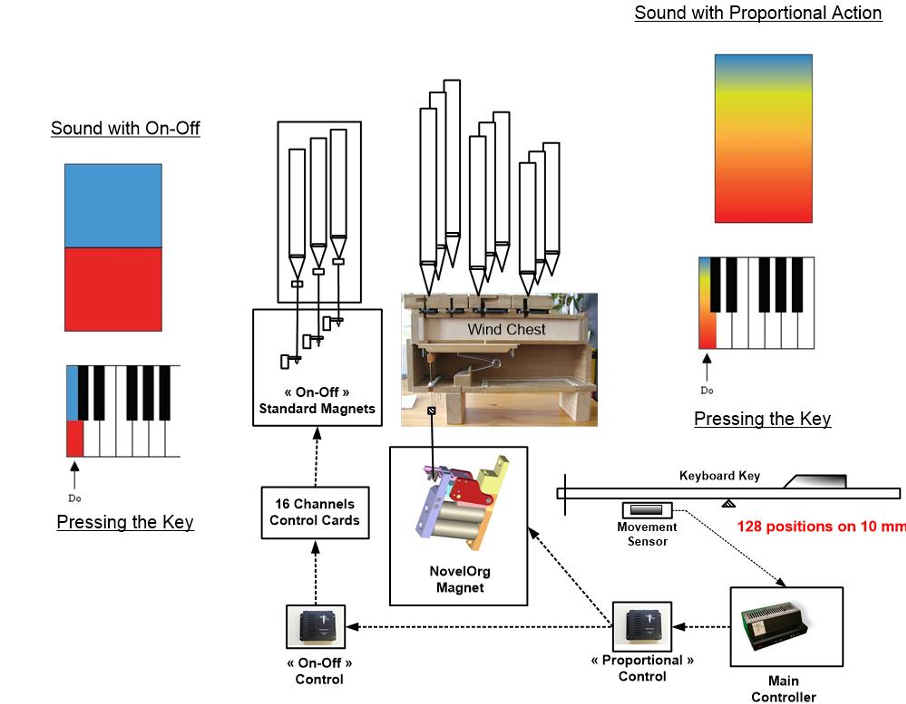 Since we have integrated a computer in the background of the pipe organ, the organ control system is therefore programmable. All this opens the way for innovations that can lead to new and unknown possibilities for the pipe organ. Without changing its fundamental nature, it is now possible to modernize the organ and ensure greater sustainability.

The organ console is the link between the organist and the heart of the instrument, as the keyboard is the user interface of a computer. With NovelOrg, it is possible to couple keyboards without changing the weight of the action, to change the order of the keyboards, and to add new functionalities.

The addition of new functions to the instrument will allow greater flexibility, both for the organist in the performance of new musical compositions, and for the organ builder in the production and maintenance of the instrument. One only has to think of the different types of "linked and free" couplings, the different "sostenuto", the separation of keyboards for "shared keyboards", the "shared stops", or any functions requested by the organists.

In short, keep the best of both worlds: uncompromising sound and technology for music and its performers.

Advantages of the NovelOrg System

The new technology brings considerable advantages for organists and organbuilders who build instruments with mechanical action. Architectural and space constraints are often compromising in the realization of projects — they have a significant impact on the music, specifications and manufacturing costs of new instruments.

The creation of new organs with digitally-assisted action that can use traditional windchests is a major issue for the sound of a pipe organ. This not only opens the door to new compositional techniques, ends limitation in the use of keyboards, simplifies the restoration of instruments that once had mechanical action, reduces space constraints, and records not only the pitches and rhythms of a live organist's performance, but maintains the sound of the traditional pipe organ.

With the installation of the new first generation NovelOrg proportional action system on the Martin Pasi organ at the Co-Cathedral of the Sacred Heart of Houston (inaugurated in 2010) and the Grenzing organ at Paris Radio France (inaugurated in 2016), a turning point has been reached in the history of organ building: a new generation of organs with digitally assisted action in addition to traditional mechanical action.

In the Houston organ, the great, swell, and positive divisions are located on the left side of the picture, and have both traditional mechanical and NovelOrg actions; the right side consists of the grand choir and pedal, which use NovelOrg action exclusively. Here is a demonstration of the action on both sides of the instrument:

The NovelOrg system is now available to all organists and organ builders on both sides of the Atlantic wishing to measure the performance of these instruments.

Vision for the Future

The future of the organ lies in the rebirth of its full potential. The organ must remain at the service of early music and offer new possibilities for modern music. This is a breakthrough that has long been dreamed of and made possible by recent developments in computer microcontrollers. From now on, organ builders have access to a new digital action technology, offering the flexibility that can free them from the limitations of mechanics, while still maintaining its finesse.

The digital technology is such these days that one could play the traditional organ and accommodate distance and time limitations. One could even imagine that a concert or a master class could be given from the Houston organ and reproduced in real time on the Radio France organ, all without any compromise to sound quality.

The detailed recording and playback of famous musicians who perform and improvise could become a turning point for organ music. Imagine if you could see not only how Bach or Mozart played, but their actual touch! Access to new technologies frees us, and allows us to see an infinite number of possibilities, whether as a musician or an organ builder. Original avenues will continue to appear and serve music, the popularization of the organ, and the sustainability of this magnificent instrument, to the great pleasure of audiences worldwide.

was born in Témiscouata-sur-le-Lac (Cabano), Québec, Canada in 1947. He grew up surrounded by many siblings in a family where his father was a furniture salesman and was also the accompanying pianist and organist at their church. Pierre graduated with an electrical engineering degree from Université de Sherbrooke in 1969. He then pursued his engineering career with Hydro-Québec, specializing in high voltage electrical distribution systems. As one of the original inventors of Interphase Power Controller technology, he lead in its development at the Centre d’Innovation sur le Transport d’Énergie du Québec (CITEQ) from 1990 to 1997. He filed five international patents and participated in more than 25 scientific papers given at I.E.E.E. He has been a guest speaker in Vancouver, London, Brussels, Budapest, Denver and Washington.

President of NovelOrg, he is also an amateur organist. With the help of his technical team, he perfected a new system of electromagnetic proportional action for pipe organs. He was able to combine his passion for science and his love of music to develop an innovative product designed for traditional organ production while preserving the true nature of the instrument.